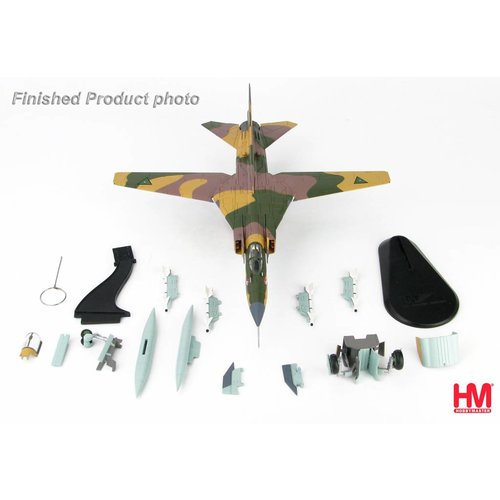 True 1/72 scale.
Professionally painted.
Great attention to detail.
All markings are Tampoed (pad applied).
Option to display the model on a stand that is provided.
Model can be shown with the landing gear in the down or up positions.
Optional armament provided.
Canopy can be displayed open or closed.
Pilot figure included.
Extremely heavy metal with a minimum of plastic.
Highly collectable.
In the 1960’s the Soviet military required a replacement for the MiG-21 that could compete with
the USAF F-14 Tomcat. It had to be very fast, rapid acceleration, carry a larger payload, capable
of a high service ceiling, long range and beyond visual range intercept capabilities. The project
was given to the Mikoyan- Gurevich Design Bureau that produced the Model 23-11 that first flew
on June 10, 1967. Production began in 1969 and eventually completed over 5,000 swing-wing
MiG-23s. A ground-attack variant was also produced, the MiG-27.