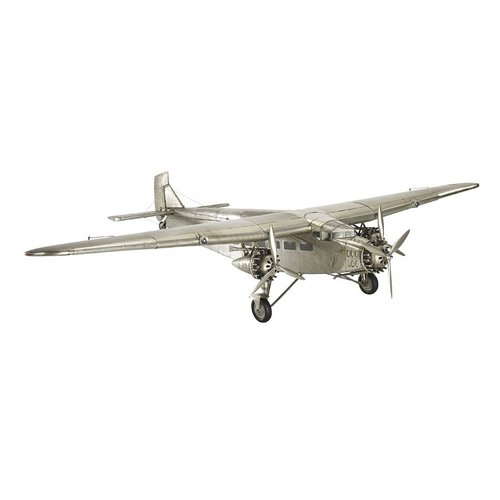 Between 1926 and 1933 some 200 Ford Trimotors were built in Ford's own factory. Trimotors used the same concept of corrugated metal on great thick monoplane wings that the German Junker JU-52 aircraft employed, they were flying the Berlin-Rome-London route.
Trimotors were used by Transworld Airlines in 1929 to service it's San Diego to New York route. Oil companies and wealthy individuals as well as the military made use of this plane to shuttle people and cargo.
The Ford Trimotor and Junkers JU-52 were pioneering aircraft that led to generations of Transport Aircraft and inspired companies such as Boeing and Douglas to create larger, faster modern aircraft that we are all familiar with today. Religated now to Museums and the occassional air show, the Ford Trimotor has made it's mark in history.

This model is hand made and hand finished by craftsman
Corrugated Aluminum sheet over wooden frame, just like the fabric planes
No Markings, apply your own decals and insignia's
40 inch wingspan, 26.4 inches long, 8 inches tall on the stand
Silver Color
Rubber Tires
Hang from ceiling - sits on wheels or mounts on stand for display
Stand Included
AM Boxed